Yep, how could I live with myself if I failed to acknowledge Waffle Day in one of my obscure holiday posts? After all, I think we can all agree that few things in life are so worthy of praise as waffles. In fact, waffles are so deserving that they actually have two holidays all to themselves–International Waffle Day and National Waffle Day, August 24th. Today’s version of the holiday originated in Sweden and is called “Våffeldagen.” According to the website I found it on, this day “was also considered the start of spring in Sweden and Europe.  It became a custom for Swedish families to celebrate the two events by making waffles on this day.” So there you have it–waffles bring families closer together.

In case you’re wondering about the other waffle day in August, it was founded in order to celebrate the patenting of the waffle iron by Cornelius Swarthout of Troy, New York on August 24, 1869. Can you believe waffle irons have been around for that long? Apparently, waffles themselves have been around for even longer, dating back to the 1300s in Greece (although they were topped with cheese and herbs then, because sadly, pancake syrup wasn’t around). Also, did I say there were only two waffle holidays? Sorry, I meant three, because there’s also a separate day simply called “Waffle Iron Day” on June 29th. In any case, it’s clear waffles get a lot of love.

But does that love equate to poetry? Typing “waffle” into the Poetry Foundation’s search bar didn’t net me much, so I decided to take a different approach this week. Rather than trying to find classic or well-written poems on the subject, I just went for some fun ones. How about beginning with a poem written by the Waffle House itself (posted on its Facebook page):

Where the Customer is king
And every booth is a throne

Come one come all
Bring the whole family out

It’s a good thing heaven’s open 24/7 (and during most major natural disasters). But if the waffle house poem doesn’t satisfy your craving for waffle tributes, how about this hilarious entry (it’s long, but trust me, it won’t take long to read):

I Want My Waffles

I have an Urge for Waffles

Wake up in the morning

And I’m not in the mood

I want something FUNKY

And weird looking too

They taste so yummy

They fill my tummy

But WHAT THE HEY!

I have an urge for…

They make me happy

I’ll roast over an open fire

Don’t give me a pancake

Don’t give me an egg

Don’t give me cereal

OH THEY TASTE SO GOOD!

I WANT MY WAFFLES

ur still reading this? Go make my waffles!

No! Make them now!

Yes now! Did I stutter?

Well, I think that pretty much sums up most people’s opinions on waffles. So what are you waiting for! Go get some! And perhaps use them as inspiration for your own creative waffle poetry. 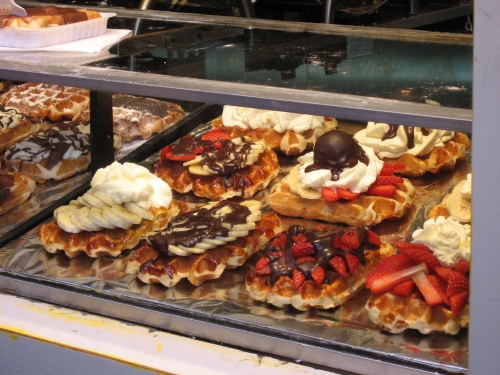 If I ever visit Brussels, I’m going to this place.